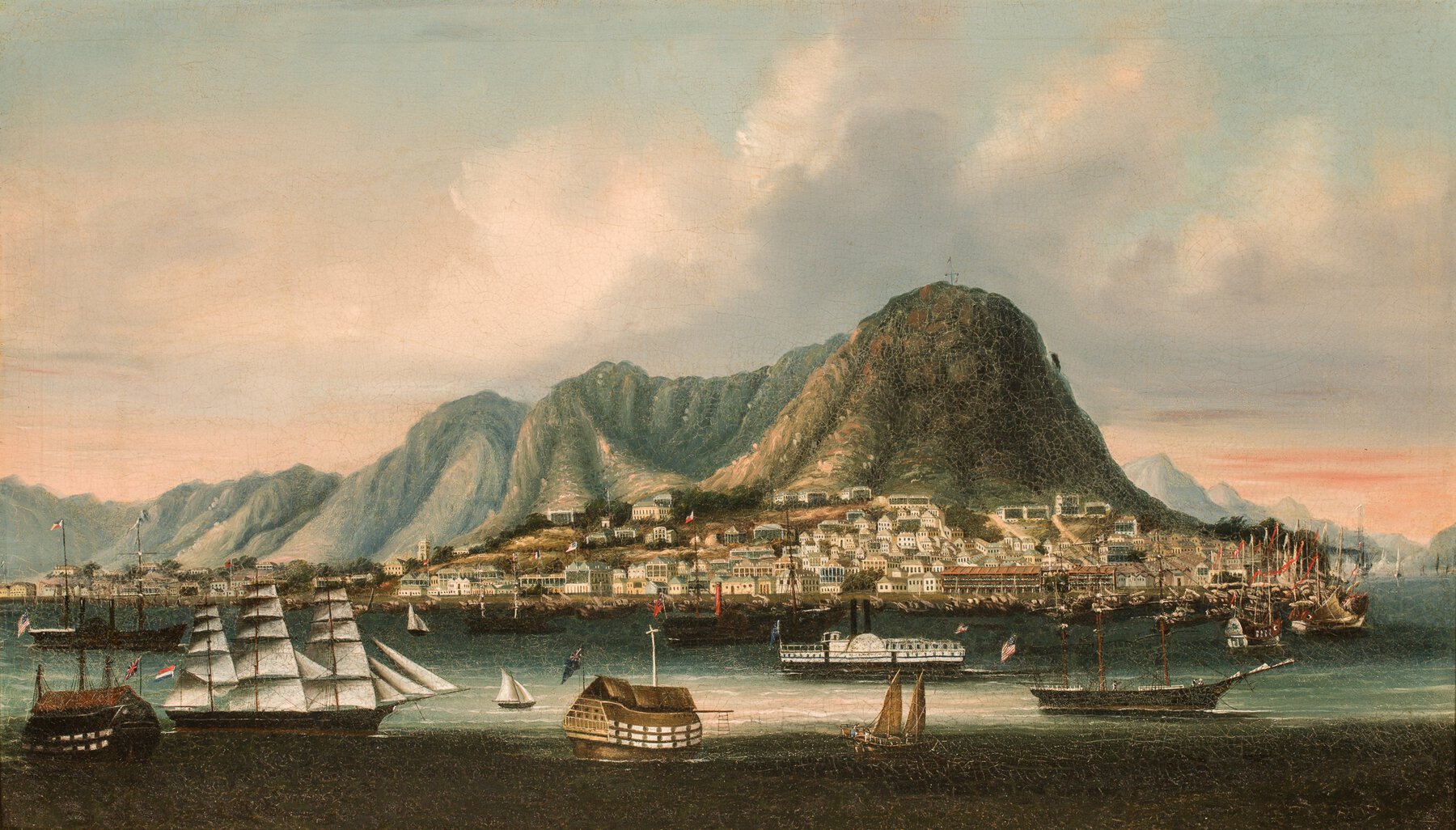 The nineteenth century saw an increasingly interconnected global economy reliant upon the often involuntary movement of people. The units in this lesson plan examine both forced and “free” migration and their implications for what we traditionally consider the field of Victorian Studies, with a focus on Chinese migration. Rather than treating China as a separate, distant entity, these units explore the interconnections between the Pacific, the Atlantic, and the “Victorian” world.

It has become imperative today to reconsider the position of Asian and Asian American history and culture within the Victorian classroom – and it is particularly urgent in the wake of the Covid-19 pandemic and recent anti-Asian discourse and violence. Scholarship by Lisa Lowe and Edlie Wong, among others, contends that writings about Chinese migrants were integral to nineteenth-century debates about who could become a citizen in a liberal state. Discourses on Chinese migrant labor, slavery, abolition, and immigration intersected in often counterintuitive ways, as Chinese laborers were brought over from Guandong, often via Hong Kong, to the Caribbean and the American West. An attention to these intersections helps students analyze a “Victorian” world reliant upon mass migration and the connections between the Atlantic slave trade and the often forcible relocation of Chinese laborers.

This lesson plan explores the interconnections between Chinese migration and other forms of migration and movement, working across the Pacific and Atlantic contexts. In doing so, it draws upon scholarship in Asian American Studies, Black Studies, China Studies, and Postcolonial Studies to interrogate the boundaries of Victorian Studies. Students will evaluate the contours of the category “Victorian” as well as the imbrication of genre, form, and material culture in the way we imagine migration and trade in the nineteenth century.

The units in this lesson plan can be taught in order or in isolation. They begin with representations of China (both in discourse and objects), then move on to writings about Chinese migration, and finally end with contemporary writings. This series thus uses Chinese migration as a lens to survey methodological approaches to studying the “global” nineteenth century, ranging from Edward Said’s Orientalism and Elaine Freedgood’s thing theory to Olivia Loksing Moy’s “reading in the aftermath.” It is targeted more towards an advanced undergraduate student, but selected readings can be assigned to less advanced students.

The introductory unit opens with Eric Hayot’s The Hypothetical Mandarin: Sympathy, Modernity, and Chinese Pain and the construction of China as the ultimate “other” in western writings from the Enlightenment onwards. It then redirects attention to Chinese objects, their global production and circulation, and their symbolic significance in everyday Victorian life. This section draws upon work by Freedgood and Elizabeth Hope Chang to analyze what Chang calls the “familiar exotic” in select nineteenth-century texts; then, students will consider the narratives constructed around actual nineteenth-century objects in a local or virtual museum. The following units examine constructions of the individual subject and Chinese migration as well as the composite genres and forms that were shaped by these debates. The final unit considers the ongoing “aesthetic afterlife” of nineteenth-century British Orientalism and approaches to complicating that afterlife, whether through historical fiction or literary criticism.

Collins, Wilkie. “Chapter III, The Second Epoch: The Story Continued by Marian Halcombe.” 1860. The Woman in White, Project Gutenberg, 2008.
In this excerpt, Marian Halcombe uses the example of China to assert what she believes to be British values. Speaking to the Italian villain Count Fosco, she insists, “we have one unquestionable virtue in England which is wanting in China. The Chinese authorities kill thousands of innocent people on the most frivolous pretexts. We in England are free from all guilt of that kind – we commit no such dreadful crime – we abhor reckless bloodshed with all our hearts.” In response, Count Fosco offers Marian and Laura some French bon-bons from “a pretty little inlaid box,” suggesting through these objects the hypocrisy and ignorance of Marian’s claims.

This introductory unit might also include a theoretical and historical background on British conceptions of China and relations with the Qing government. For a useful overview on foreign relations and interventions in China in the nineteenth century, see Bickers, Robert. The Scramble for China: Foreign Devils in the Qing Empire, 1832–1914. Allen Lane, 2011.

Dickens, Charles, and Richard Horne. “The Great Exhibition and the Little One.” Household Words, vol. 3, no. 67, July 1851, pp. 356–60
By contrasting the Great Exhibition and the Little Exhibition (i.e., American Nathan Dunn’s exhibition, “Ten Thousand Chinese Things,” on display in London in 1842 and 1851), Dickens and Horne perceive Qing China as developmentally static in contrast to Britain’s industrial progress. By the end, the essay makes clear that it is using stereotypes about China to argue against the “stasis” of the Tory party.

Chang, Elizabeth Hope. Britain’s Chinese Eye: Literature, Empire, and Aesthetics in Nineteenth-Century Britain. Stanford University Press, 2010. In particular, see pp. 6–13 and 115–18.
Chang argues that domestic Chinese objects – what she calls the “familiar exotic” – brought conceptions of an exotic, distant place into the Victorian everyday. She also explores the order imposed by Victorian exhibitions and museums onto the objects they arranged and displayed, simultaneously affirming and complicating Victorian global power.

Freedgood, Elaine. “Souvenirs of Sadism: Mahogany Furniture, Deforestation, And Slavery in Jane Eyre.” The Idea in Things, University of Chicago Press, 2009, pp. 30–54.
When reading nineteenth-century literature, Freedgood advocates for an attention to the material objects that linger in the background of a text. Rather than seeing these objects as symbolic for a character’s internal growth or reading literature allegorically to access its deeper meaning, she instead demonstrates a methodological approach that analyzes the imperial and material history contained within these objects. In the context of Jane Eyre, she highlights mahogany and madeira.

Drawing upon Chang and Freedgood, students analyze narratives that museums construct around nineteenth-century Chinese objects. Each student selects an object in either a local or virtual museum and considers the following questions: 1) How does the museum’s exhibit frame, narrate, or contextualize the Chinese object? 2) What does this framing tell us about the exhibit’s attitudes and assumptions about the object and its history? Students then discuss the varying interpretations and narratives offered by different museums.

Options for a virtual museum analysis

Hong Kong Maritime Museum. The Dragon and the Eagle: American Traders in China, A Century of Trade from 1784 to 1900.

---. The Silver Age: Origins and Trade of Chinese Export Silver.

This unit might also include a brief overview of the history of opium and the China trade (which was deeply linked to India, specifically Calcutta) as a means of providing context for the objects addressed by Chang and Freedgood. For a good overview, see Julia Lovell, The Opium War: Drugs, Dreams and the Making of China, Picador, 2012.

Liu, Ken. “Good Hunting (part 1 of 2)”; Good Hunting (part 2 of 2).” Strange Horizons, Oct. 2012; Nov. 2012.
Set in steampunk nineteenth-century Hong Kong, this 2012 short story is about a Chinese laborer who helps a Chinese sex worker take revenge on her British clients. It is also available as an animated short in the first season of the Netflix series, Love Death + Robots.

Lowe, Lisa. “The Ruses of Liberty.” The Intimacies of Four Continents, Duke University Press, 2015, pp. 101–33.
In this chapter, Lowe interrogates John Stuart Mill’s writings on liberalism and free trade alongside government records about Hong Kong, focusing on the colonial government’s control of labor and movement in and through the city.

Genres of Migration, Forced and “Free”

Harte, Bret. Plain Language from Truthful James. 1870.
More commonly known as “The Heathen Chinee,” Harte’s poem was originally written as an ironic critique of anti-Chinese sentiment in California and the United States in the 1870s. The poem, however, ultimately fomented prejudice against Chinese immigrants to the American West. It tells the story of three gold miners cheating at cards, concluding with an attack on the Chinese character, Ah Sin.

Wong Chin Foo. “The Chinese in Cuba: Wong Chin Foo. His Story of Chun Young Hing’s Sufferings as a Slave in Cuba.” The New York Times, 17 Aug. 1874, p. 2.
Chinese American journalist Wong recounts the story of Chun Young Hing, a Chinese migrant forced into labor in Cuba. Wong employs many of the generic strategies of the slave narrative from earlier in the century. It might be useful to teach Wong’s essay alongside an excerpt from The History of Mary Prince so that students can recognize the generic influences on Wong’s public appeal.

---. “Why Am I a Heathen?” The North American Review, 145: 369, Aug. 1887, pp. 169–79.
Wong satirizes the hypocrisy of American prejudice towards Chinese Americans and its Christianized tenor, valorizing Confucian ideals of morality over Christian exclusion.

Prince, Mary. Mary Prince. The History of Mary Prince, a West Indian Slave. Related by Herself. With a Supplement by the Editor. To Which Is Added, the Narrative of Asa-Asa, a Captured African. 1831. Documenting the American South, 2000.
Teaching The History of Mary Prince alongside Wong’s “The Chinese in Cuba” helps students reflect on composite texts and the shaping of a narrative towards specific (often white) publics. It allows them to see how Wong draws upon generic practices of slave narratives and abolitionism to advocate for intervention in Cuba.

---. “The Fugitive Coolie: The Narrative of Chun Young Hing.” Racial Reconstruction: Black Inclusion, Chinese Exclusion, and the Fictions of Citizenship, New York University Press, 2015, pp. 63–69.
This chapter analyzes Wong Chin Foo’s career as a lecturer and writer for periodicals, arguing that he used forms of “self-Orientalism” in order to demystify Chinese religious practices and disrupt conceptions of Asiatic foreignness.

Reading in the Aftermath

Catton, Eleanor. The Luminaries. Granta, 2013. In particular, see pp. 257–62 and 445–59.
While Catton’s novel primarily focuses on the gold rush in nineteenth-century New Zealand, these excerpts include the story of Sook Yongsheng, a character who migrated to New Zealand from Guangdong province.

Moy, Olivia Loksing. “Reading in the Aftermath: An Asian American Jane Eyre.” Victorian Studies, vol. 62, no. 3, Spring 2020, pp. 406–18.
Moy describes the experience of alienation encountering depictions of Chinese figures in Victorian writing as well as the parameters for Victorian Studies that previously limited her engagement with nineteenth-century Asian American sources.

Kerr, Douglas, and Julia Kuehn. A Century of Travels in China: Critical Essays on Travel Writing from the 1840s to the 1940s. Hong Kong University Press, 2007.

Lew-Williams, Beth. The Chinese Must Go: Violence, Exclusion, and the Making of the Alien in America. Harvard University Press, 2018.

McDonagh, Josephine. Literature in a Time of Migration: British Fiction and the Movement of People, 1815-1876. Oxford University Press, 2021.

Jessica R. Valdez is a lecturer in literature of the long global nineteenth century at the University of East Anglia. She is currently working on a book manuscript tentatively called, Despots and Democrats: China and America in British Literature, 1834-1901. Her first monograph, Plotting the News in Victorian Literature (EUP 2020), analyzes competing understandings of national identity in nineteenth-century novels and the newspaper press. Plotting the News demonstrates that Victorian novelists functioned as early media theorists as they thought through the overlapping systems of reality offered by newspapers and novels. She previously worked at the University of Hong Kong.