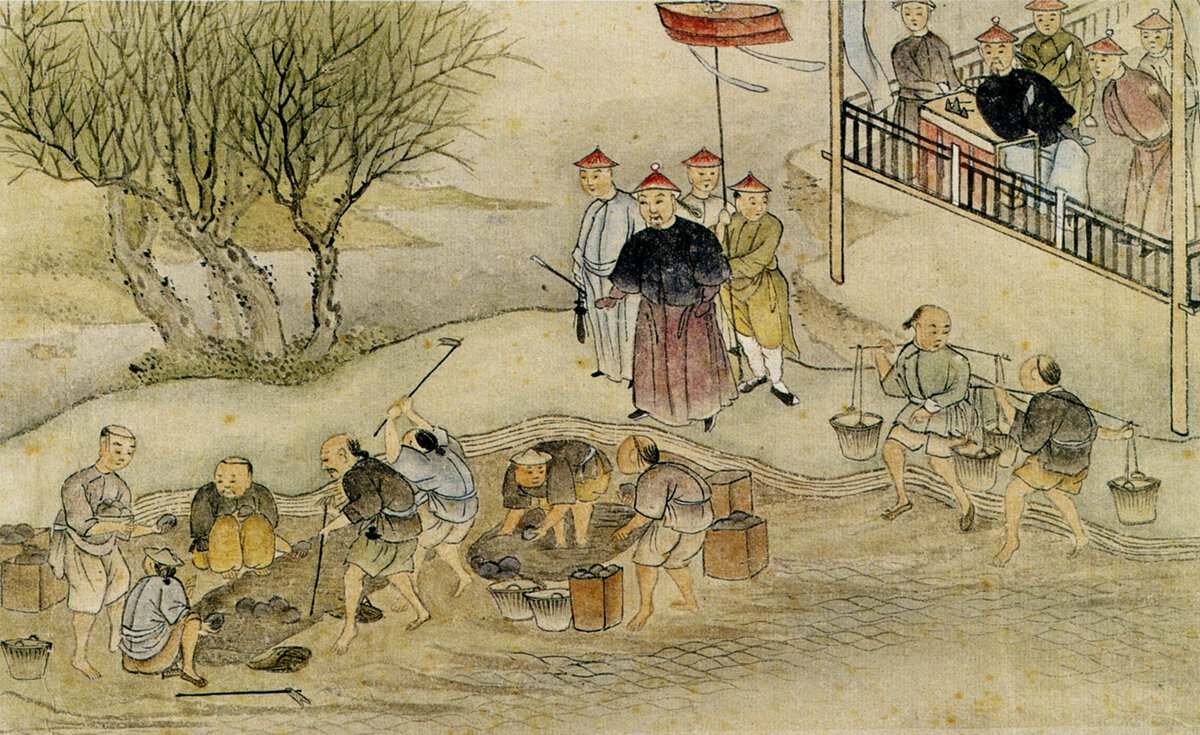 The connection and clash between Asia and the Anglophone world were, in part, facilitated by what David T. Courtwright calls the “psychoactive revolution,” a process in which hunger, the need for food, was replaced by desire and addiction in the modern world. Networks between these regions deepened and proliferated as stimulants and sedatives such as tea, opium, and coffee became increasingly accessible and popular around the globe.

For example, Britain’s taxes on tea, a commodity imported from China, inadvertently sparked the American Revolution and national independence from the British empire in the late eighteenth century. At the same time, Britain’s imperial expansion changed what Indian farmers grew: poppies replaced food crops in colonial India as opium gradually became the dominant commodity in the Sino-British trade. The opium brought by British merchants from India to China ended up giving both cause and name to the midcentury Anglo-Chinese Opium Wars (1839-42 and 1856-60). These conflicts were followed by Britain’s acquisition of Hong Kong and the legalization of the opium trade in China. Later, the emerging coffee shops in Asian port cities such as Madras, Shanghai, and Tokyo in the late nineteenth and early twentieth century presented a Western lifestyle symbolizing modernity and cosmopolitanism.

Exploring the various connotations of and imaginings about psychoactive substances can enrich our understandings of globalization and modernity. These connotations and imaginings, as shown in the suggested materials, are often more complicated than we may think. The industries that produce these substances reinforce not only global connectivity but also social or colonial stratification. Moreover, since substances are both plants and commodities, studying them reveals the intersection between imperial expansion and environmental transformation.

Examining representations of substance use additionally encourages students to consider how transnational networks affect ideas about race, gender, identity, and even imperial and literary forms. Substance use, to borrow the eighteenth-century physician John Brown’s medical theory, provides two different kinds of physiological models: an expansive pattern for stimulation and excitement; and a disease model for dependence and overdose. These physiological models were politicized and intertwined with imperialism, liberalism, and racialization in the nineteenth-century transnational context. Writing about substance use also influenced the development of aesthetics and literary forms, as writers created new genres and expanded existing ones to represent foreignness, masculinity, and race and to reflect on concepts of individuality, performativity, and social relations.

This lesson plan engages with the roles that substances played in mediating networks between Asia and the Anglophone world. I have divided the materials into four sections, each focusing on a specific facet of those roles. Each section contains a series of topics and questions that might be useful for instructors who are interested in including these materials in their courses.

The first section asks how writings about substances conceptualize globalization and its possible forms. The second section looks at the idea of foreignness for both China and the Anglophone world, exploring how substances participated in producing knowledge of the cultural other and imagining an unknown threat associated with the other. The third section explores whether substances can tell us something new about racialization and whiteness and provide a form to provincialize the center of the empire. The fourth section examines how addiction participates in the emergence of new aesthetics and spaces in transnational networks.

This lesson plan does not attempt to provide a standard four-week unit but rather four approaches alongside materials that contribute to those approaches. The materials can be incorporated into courses relevant to Victorian literature and culture, Asian Studies, Comparative Literature, Empire Studies, Medical Humanities, Critical Race Studies, and so on. Instructors can directly adopt a section, divide a section into different weeks, or select some of the materials from a section.

The global circulation of psychoactive substances was interwoven with Britain’s imperial expansion in Asia. To illuminate this connection, the following materials not only consider the debates about the drug trade but also look at the cultivation of psychoactive plants and medical theories justifying substance use. As a group, these texts explore how representations of psychoactive plants and studies of substances’ medical effects provided new forms for authors to imagine empire, colonial agency, and globalization. By examining the globality of psychoactive substances, this section thus brings Empire Studies into conversation with the Medical and Environmental Humanities.

Brown, John. The Elements of Medicine; or, A Translation of the Elementa Medicinae Brunonis. With Large Notes, Illustrations, and Comments. Printed for J. Johnson, 1788. In particular, see chapters 2 and 3 (pp. 3–37).

This section examines how both East Asia and the Anglophone world associated substance use (using tea or opium) with foreignness. It looks at the connotations this association could generate in literary works and periodical writings: How do these texts present the foreign? How does the imagined invasion of foreign substances into individual bodies challenge or confirm the Sinocentric or Anglocentric worldview? How is gender hierarchy involved with these imaginings of foreignness?

Fortune, Robert. A Journey to the Tea Countries of China; Including Sung-Lo and the Bohea Hills; with a Short Notice of the East India Company’s Tea Plantations in the Himalaya Mountains. John Murray, 1852. In particular, see chapters 10–15 (pp. 182–271).

This section looks at the intersection of substance use and racialization in English literary texts. The materials and questions focus on substances’ transformative effects, that is, how white characters are racialized, rather than how non-white identities are stereotyped in writings about addiction. As, from Thomas De Quincey to Robert Louis Stevenson, white addicts were identified as Asian-like, animal-like, or deformed, the distinction between the white and the non-white in depictions of drug abusers was gradually blurred in the nineteenth century. Making the deformed other a doppelgänger or a part of the self, writings about addiction challenge racial classification and the concept of race by showing the possibility of whiteness being contaminated.

Materials in this unit engage the connection between substances and aesthetics: What aesthetic categories are made possible by writings about substance use when addiction to substances is presented as obsession with objects (such as Dorian Gray’s beautiful opium box), spaces, lifestyles, or beliefs? What’s the relationship between such aesthetic categories and the transnational context?

Menglu Gao is an Assistant Professor of Victorian Literature at the University of Denver. She specializes in nineteenth-century British and Anglophone literature, with research interests in medical humanities, empire studies, Anglo-Chinese transnational studies, and critical theory. Her current book project examines how medical theories relevant to opium use and addiction provided new ways for nineteenth-century authors to imagine the structure of the British empire. Her work has appeared in Literature and Medicine.

Anonymous. “Commissioner Lin and the Destruction of the Opium in 1839.” c.1840. Wikimedia Commons. Public domain.