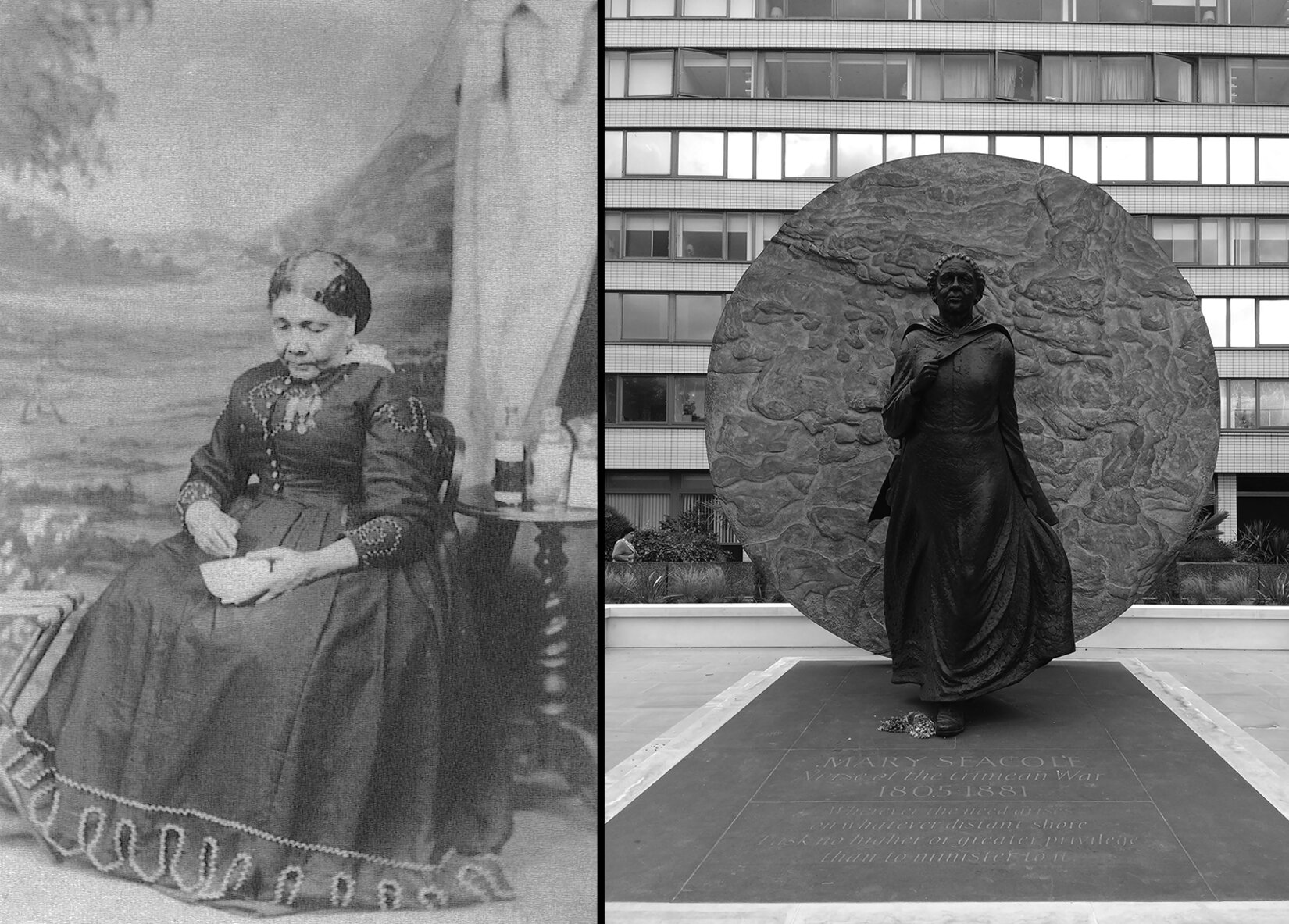 This lesson plan focuses on Mary Seacole’s positioning in the history of medicine and its relation to the study, teaching, and practice of the “care” professions, particularly nursing. It considers some of the ways that readings of Seacole and her autobiography, Wonderful Adventures of Mrs. Seacole in Many Lands, are framed in the context of the history and practice of nursing. This lesson plan offers a starting point for interrogating westernized, Eurocentric conceptions of medical knowledge and care. It highlights how Seacole’s medical knowledge and care work differ from Eurocentric norms. For example, Seacole identifies as part of a lineage of Jamaican “doctresses,” and worked as a nurse, hotelier, and sutler. In this context, the lesson plan also explores Seacole’s knowledge and experience of treating epidemics, and how that discussion highlights issues of racism, prejudice, and marginalization in the diagnosis and treatment of infectious diseases. This lesson plan encourages students to explore how considerations and reconsiderations of Seacole’s positionality – in both history and scholarship – are complicated by, and complicate, the intersections of gender, race, knowledge, and power in the study and practice of healthcare.

Seacole and Medicine: History and Pedagogy

Summary: There continues to be much debate surrounding Seacole’s importance to the history of nursing and her place in its pedagogy. This debate speaks to the evolving place of nursing as a profession within the broader medical community. It also raises questions of knowledge and power in medicine, highlighting the continued privileging of Eurocentric medical traditions and knowledge as the normative standard of medical practice and care. Questions that are often raised in discussions of Seacole’s place in the history and study of medicine include: what form(s) her medical, nursing, and care work took; her educational background and apparent lack of accredited, formalized training; her use of traditional Creole, Caribbean, and African medicine and remedies; and her self-described role as a “doctress.” In Wonderful Adventures, Seacole identifies herself as being part of a lineage of Jamaican “doctresses,” and describes her mother as keeping “a boarding house in Kingston, and [being], like very many of the Creole women, an admirable doctress.” Seacole’s medical training and practices challenge Victorian, Eurocentric, and colonial definitions of medical knowledge and practice.

This pathway provides students with an overview of Seacole’s positioning in the history and development of medicine (with a focus on British and North American nursing contexts). In particular, it examines the contexts of colonialism and empire within which Seacole was living, working, and writing, and how these contexts informed, and continue to inform, Seacole’s positioning in medical discourses. This pathway offers a space to explore the role of prejudice and discrimination in rendering both physical bodies and bodies of knowledge as “foreign” and “other,” and therefore to be viewed with suspicion or dismissal. It highlights how a consideration of Seacole can serve as a lens for exploring the intersections of colonialism, eurocentrism, marginalization, identity, and power in contemporary medical contexts, including nursing teaching and practice.

“Before the passengers for Panama had been many days gone, it was found that they had left one of their number behind them, and that one – the cholera. I believe that the faculty have not yet come to the conclusion that the cholera is contagious, and I am not presumptuous enough to forestal them; but my people have always considered it to be so.”

Summary: The concept of germ theory, the idea that germs are linked to the spread of disease, was not widely accepted in western contexts until the late-nineteenth century, with the work of Louis Pasteur and Robert Koch, among others. Mary Seacole was a supporter of the validity of germ theory, and her discussions of infectious diseases such as cholera in Wonderful Adventures of Mrs. Seacole in Many Lands (particularly chapters II, IV, and VII) reflect her knowledge and experience of epidemics and outbreaks. In the British and American contexts in the late-nineteenth and early-twentieth centuries, debates surrounding diseases such as cholera were often linked to the identities of those infected. The spread of disease was frequently associated with marginalized groups, such as those living in poverty, racialized groups, women, or immigrant populations.

This pathway examines how Seacole discusses disease and the spread of disease. A range of contextual and critical sources highlight links between race and disease in discussions of contagion, in both nineteenth-century contexts and today. This pathway also offers a starting point for a consideration of how practices of colonization and systemic racism continue to affect the ability of marginalized populations to access healthcare as well as the quality of that care.

Summary: Many of the conversations surrounding Seacole’s care work are focused on her role as a nurse during the Crimean War, often juxtaposing her with, or subordinating her to, the life and work of Florence Nightingale. These debates raise questions about the nature of Seacole’s care work, both in the Crimean context and beyond it. Seacole’s medical knowledge and care work do not fit within traditional (western, British, colonial) definitions of the scope of a nurse’s knowledge and work, and Seacole herself does not draw a clear distinction between her nursing and her other employments. In her own words, she “gained a reputation as a skilful nurse and doctress,” while also running a hotel and working as a sutler (selling provisions and supplies to the troops). By examining a combination of both Seacole’s Wonderful Adventures of Mrs. Seacole in Many Lands (particularly chapters II, IV, and VI), and a selection of secondary materials, this pathway highlights how considerations of gender, race, and class shaped Seacole’s care work, including what forms and roles that care work took, and how and where she was able to undertake that work.

These considerations continue to frame much of the debate surrounding Seacole’s role in nursing and the validity of her care work, with some arguing her life and work should not be taught in nursing curriculums because she does not fit within the accepted narrative of the nursing profession’s origins and identity. This pathway offers a space to explore how the ongoing debates surrounding Seacole’s contributions and significance highlight the legacies of racism, colonialism, classicism, and gender discrimination that continue to shape both the practice and pedagogy of the nursing profession. Examining the intersections between gender, race, and class in the practice and reception of Seacole’s care work highlights the continued importance and impact of these considerations on the lived experience of care workers today.

This lesson plan does not include Neo-Victorian/Postcolonial literary materials at present.

Sleeth, Peter. 2018. “Mary Seacole: Disease and Care of the Wounded, from Jamaica to the Crimea.” Collaborative Blog on Nursing. In Nursing Clio. 22 March 2018.

Breanna Simpson is a doctoral candidate and teaching assistant in the Department of English at York University in Toronto. Her research focuses on gender studies and queer theory, classical reception, world literature, and late Victorian fiction. Her dissertation, In Pursuit of Cupid’s Daughter: The Construction and Control of Desire in Ancient and Victorian Narratives, interrogates the concept of desire by examining forms and practices of reception, power, subjectivity, and identity.

(Left) Maull & Company. Mary Seacole. Wikimedia Commons, 1873. Public domain. Jennings, Martin, and Owen Blacker. One of the only known photographs of Mary Seacole, the staging of this image offers a glimpse of how Seacole’s medical knowledge and care work were presented and perceived within her lifetime.

(Right) Jennings, Martin, and Owen Blacker. Mary Seacole. Wikimedia Commons, 2016. Creative Commons CC0 1.0 Universal Public Domain Dedication. This memorial statue of Mary Seacole stands outside of St. Thomas’ Hospital in London, opposite the Houses of Parliament. Its commissioning and placement was the culmination of a twelve-year campaign to raise funds and awareness of Seacole’s legacy. However, the statue was the subject of much debate and vocal opposition, highlighting the continued discourse concerning Seacole’s significance as a historical figure and her legacy in the history of medicine.