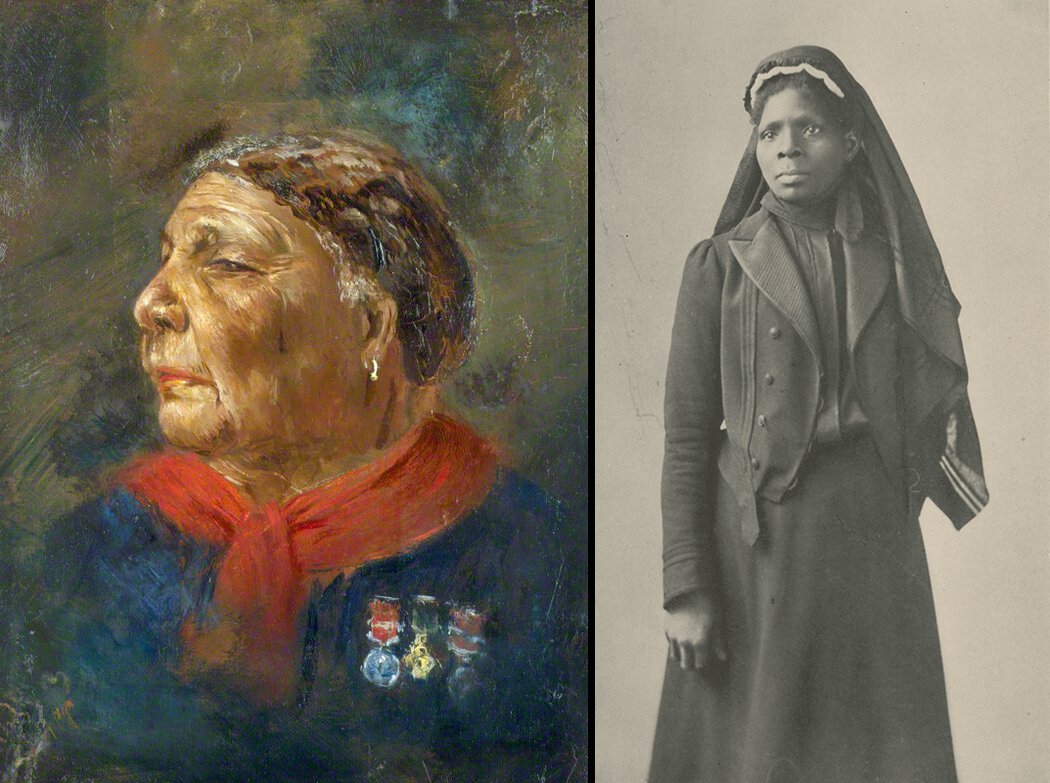 This lesson plan offers students an expansive look at the professionalization of female nursing in British, transatlantic, and transnational combat zones, specifically those of the Crimean War (1853-56) and the American Civil War (1861-65). Popular histories of nursing identify Florence Nightingale (or more recently Mary Seacole) and Clara Barton as the respective “founders” of nursing in England and America. Instead, this lesson plan will teach students about the establishment, development, and modernization of women’s nursing in wartime during the mid-nineteenth century. Nightingale’s influence on Civil War nursing practices, along with Anne Reading’s service as a nurse in both conflicts, shows the extent to which female care work crossed national boundaries. The students could also survey the diverse range of nurses who cared for these transnational armies, including English, Irish, Jamaican, French, Piedmontese, Russian, and American (particularly African American) women.

Nightingale lost control of most of the female nursing performed in British hospitals that aided sickly or wounded soldiers and civilians on the frontlines during the Crimean War. As a result, multiple approaches to care evolved under the leadership of Mary Stanley, Mother Frances Bridgeman, Eliza Mackenzie, Henrietta LeMesurier, and Maria Parkes. By covering various models of British nursing, students will learn that these female administrators often differed from Nightingale’s methods and devised their own strategies for care work. Students can also get a fuller picture of the alliances and rivalries between British women in the Crimea, along with the similarities and differences in their backgrounds and styles of nursing in the military, naval, and civilian hospitals.

This lesson plan’s transnational scope will allow students to use comparative methods in examining Seacole’s clinical assessments and medical treatments (see her brief cameos in the neo-Victorian novel The Rose of Sebastopol [2009]). The fact that slavery was a key root cause of the Civil War and Black female nurses served on the Union side make it an especially relevant context for Seacole’s work. Her experiences of gender, racial, and class discrimination during the Crimean War can be juxtaposed with those of Civil War nurses, such as Harriet Tubman, Susie King Taylor, and the fictional Charlotte Jenkins (from the show Mercy Street [2016-17]).

The Professionalization of Female Nursing

Summary: During the Crimean and American Civil Wars, multiple nations commissioned female nurses to serve their troops in the belief that care work was a natural extension of women’s domestic role and required the feminine virtues of kindness and sympathy. In reality, women became war nurses from a variety of motives: poverty, boredom, romance, piety, compassion, patriotism, and career aspirations. This grouping invites students to consider the rise and/or emergence of female nursing during wartime and women’s efforts to make it a legitimate profession for themselves and others. They will be introduced to nurses such as lady volunteers, Catholic nuns, male orderlies, working-class women, soldiers’ wives, former slaves, and even Queen Victoria. These materials could help students to examine the reception of female nurses, their position in the hospital hierarchy, and their everyday tasks and routines. In particular, they will think about the hostile reception that nurses often received from doctors and the masses until they proved themselves or garnered public approval for their work.

Students could also inspect how nurses handled the pressures of racism, sexism, and classism, along with the dangers of military conflict, in order to perform their care work and earn respect for their accomplishments. One possible discussion topic is the competition that arose between nurses, such as Nightingale and the other nursing administrators from England, Nightingale and Seacole, or the fictional Mary Phinney and Anne Hastings from Mercy Street. However, nurses also cultivated a strong sense of professional solidarity, paid tribute to other members of their community, and trained younger generations of female care workers. For instance, the perceived “rivalry” between Nightingale and Seacole can be contrasted with the interracial friendship between Clara Barton and Susie King Taylor. Women’s camaraderies and rivalries in nursing can also serve as a starting point for students to examine first-wave feminism and women’s work movements later in the century. Female nurses’ narratives about their military service and related scholarly materials record their pioneering efforts to work with (or against) others across gender, race, class, national, and religious lines. During these conflicts, the highly-publicized entrance of female nurses onto battlefields and in hospitals was important because they generated new professional roles for women in multiple countries.

“Of course, had it not been for my old strong-mindedness [...] I should have given up the scheme a score of times in as many days; so regularly did each successive day give birth to a fresh set of rebuffs and disappointments. I shall make no excuse to my readers for giving them a pretty full history of my struggles to become a Crimean heroine!”

The “Heroic” Individual and the Community

Summary: In this grouping, students will explore the nuanced relationship between the “heroic” individual and the communities they served during wartime. Specifically, female nurses emerged as “heroines” during the Crimean War and the American Civil War through autobiographical self-narratives and/or popular representations of them that circulated among the public. For instance, Stefanie Markovitz finds that the media images of Nightingale as the “Lady with the Lamp” created new models of female heroism in Victorian fiction. These representations contrasted with male soldiers being viewed as wounded and emotional figures in need of rescue from brutal wars characterized by high casualties, army mismanagement, and worthless causes. This grouping will guide students to reflect on how female nurses ended up as “heroes” for behaving like (or portraying themselves as) what Clara Barton calls the “nurses, consolers, and saviours of men.” It could even serve as a counterpart or addition to courses focused on male soldiers or military conflict by highlighting women’s labor on the front lines during major nineteenth-century wars.

While these “heroes” received public veneration, they sought to use their status to benefit the communities they could relate to based on identity factors such as gender, race, class, nationality, religion, or profession. For instance, nurses felt a strong sense of community with other female nurses, men whom they tended as patients, the nations they served, and even members of the enemy army. Their role as “heroes” allowed men and women to speak on behalf of the groups they belonged to so they could advance key social, political, or professional reforms that would improve their collective well-being. Students exploring this grouping could analyze how nurses lobbied for the good of their communities and the limitations or drawbacks to the idea of “heroism.” This subgroup invites students to consider how we conceptualize a “hero” or an “enemy,” how this notion is raced, classed, or gendered, and how the hero stands for, with, or against the community. One interesting pairing is Seacole (a “Crimean heroine”) nursing the colonial British army like a “mother” juxtaposed with Susie King Taylor (an unsung heroine) tending Black soldiers as a nurse and cook for the 33rd United States Colored Infantry Regiment. In her autobiography, Taylor commemorates the military service of African American men and women during the Civil War as part of her appeal to readers to protect Black people from oppression in Jim Crow America.

Sentiment and the Body Politic

Summary: This grouping addresses the role of emotion in wartime contexts and the ways in which feeling served as an index of the metaphoric health of the body politic in different nations. How might sentimentalized depictions of nurses, soldiers, or heads of state reshape gender roles, army nursing, military reform, or royal iconography? Do representations of Nightingale as “the Lady with the Lamp,” Seacole as the “mother” of the British army, or Clara Barton as the “Angel of the Battlefield” undermine or reinscribe the role of the Victorian Angel in the House/American True Woman? Why do the bodies of men and women (particularly wounded bodies) and the emotional reactions that they express or provoke in others function as a barometer of national well-being? For example, what does the publicity hyping Queen Victoria’s sympathy for the physical sufferings of her troops in the Crimea suggest about the state’s welfare? How does this compare to Seacole playfully impersonating the Queen in Chapter XIX of Wonderful Adventures or Punch reconfiguring her into a modern King Col showing royal largesse in “A Stir for Seacole”?

Alternatively, students could think about how the transnational public responses toward war influenced the administration of the military, the practice of female nursing, or support for violent warfare. The diseased, bleeding, or wounded bodies of the soldiers and civilians under nursing care suggested that the body politic was unhealthy or violently torn apart by war. For example, the final section implying that the narrator of Tennyson’s Maud will die fighting in the Crimea could gesture at a critique of faulty leadership or a noble death for his country’s sake. In keeping with the darker interpretation, how might nurses, politicians, and institutions have weaponized sentiment for their own ends? Was feeling or emotion used to manipulate characters like Tennyson’s narrator or real soldiers into sacrificing their bodies for the self-interested motives of the state? What role did women and people of color play in healing the wounded body politic? How was social injustice inscribed on the bodies of the oppressed (i.e. male soldiers, lynching victims, colonized subjects, etc.)? In a modern context, students could analyze how neo-Victorian works like Jackie Sibblies Drury’s play Marys Seacole connects Seacole’s nursing in the Crimea with violence against people of color, especially in Jamaica and America. Why does Drury use Seacole’s care work in a military zone to highlight the brutal assaults on Black people in contemporary America?

Nightingale, Florence. 1858. Subsidiary Notes as to the Introduction of Female Nursing into Military Hospitals in Peace and in War. London: Harrison and Sons, St. Martin’s Lane.

Reading, Anne. 2006. The Journal of Anne Reading: From Florence Nightingale to Dorothea Dix and Beyond. Edited by Margaret Garrett Irwin. n.p.: Trafford Publishing.

Indu Ohri is a Preceptor and the current Echols Fellow in the University of Virginia’s English Department. Her book project examines how the ghosts in women’s supernatural fiction reflect various unspeakable social concerns of late Victorian and early twentieth-century Britain. Her research and teaching interests include Victorian and Edwardian women’s ghost stories, Victorian authors of color across the British Empire, and the intersection between feminism and community engagement. She has published her work in the Victorians Institute Journal Digital Annex, Preternature, and Adaptation in Young Adult Novels: Critically Engaging Past and Present (edited by Dana Lawrence and Amy Montz, Bloomsbury, 2020).

(Left) Albert Charles Challen. Mary Seacole. 1869. National Portrait Gallery. Public domain. Albert Charles Challan painted this portrait of Mary Seacole when she was in her sixties in 1869. This contemporary representation of Seacole visually illustrates different aspects of her identity as a Creole woman and a Crimean War nurse. She is wearing a red Caribbean scarf and miniature versions of the British Crimean Medal, the Turkish Order of the Medjidie, and the French Legion of Honour. The portrait received her endorsement for display at a Royal Academy exhibition, though there is no record it was ever accepted. It is now located in the National Portrait Gallery in London, England.

(Right) Susie King Taylor. 1902. Library of Congress, General Collections. Public domain. This photograph serves as the frontispiece of Susie King Taylor’s autobiography Reminiscences of My Life in Camp with the 33rd United States Colored Troops, Late 1st S.C. Volunteers. Her autobiography documents her service as a nurse, laundress, and teacher with the 33rd United States Colored Troops Infantry Regiment during the American Civil War. King’s photograph conveys her strength and resilience as the first African American woman to open a school for freed slaves in Georgia and the only one to publish an autobiography about her Civil War experiences.