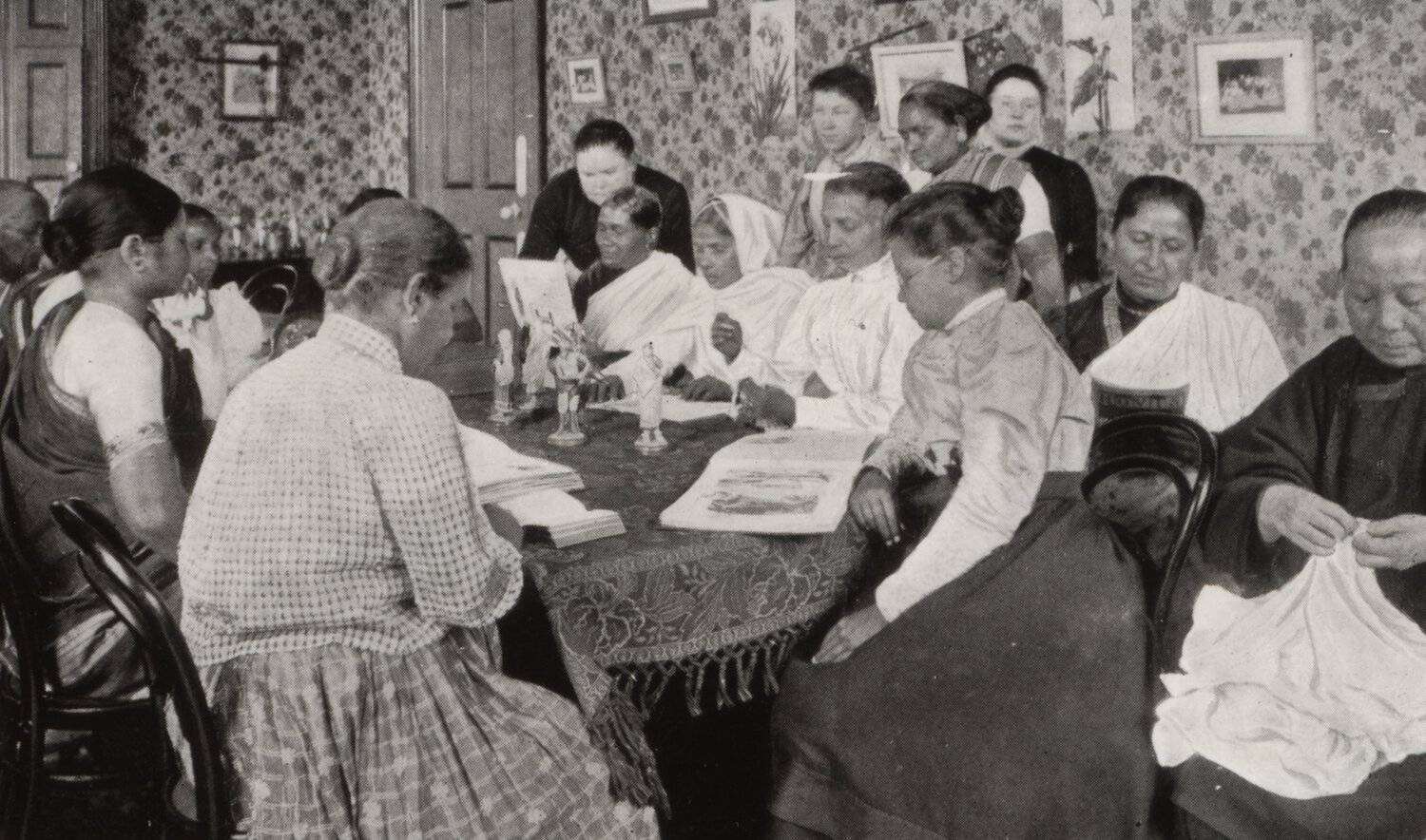 In this course, we began with questions: “What is ‘Victorian’?” “What is ‘British’?” Students responded with original drawings, word clouds, and descriptions in which petticoats and top hats featured prominently. Their impressions of marriage plots and drawing-room dramas were consistent with the vision of Britishness one might associate with PBS's Masterpiece – or its source material, canonical nineteenth-century literature. Our conversation that first day illustrated Antoinette Burton’s argument that Britishness remains a “remarkably resilient cultural commodity” and that Britain continues to be depicted as “an essentially white island of history” (82–3).

This was the premise under scrutiny in my Fall 2020 “Introduction to Victorian Literature” course. I had unmade and remade my syllabus the prior summer, inspired by conversation in the field and action in the streets. Responsiveness – to the historical moment, to the technological and logistical constraints of pandemic teaching, and to student needs – became my foremost pedagogical principle. The resulting course was half synchronous, half asynchronous, and all online, using the anthology builder and annotation tools at COVE (Collaborative Organization for Virtual Education). It was a course very much of its moment, including content from the past summer and emphasizing the through-lines from the nineteenth century to the year 2020. As a result, student engagement in the course was exceptionally high, despite the challenges of online learning in a pandemic. It was also a course in transition. Built on a previous iteration that used The Norton Anthology of English Literature, the course bore attachments to canonical works of Victorian literature, even as it situated those works in new conversations and textual constellations. The syllabus captures only one moment in what was and is an ongoing process of undisciplining.

A major goal of the course was to enlist students in helping me split open received notions of “Victorian” (and “English” and “British”). We began this process from day one but returned to our foundational questions regularly over the course of the semester. We analyzed Danny Boyle’s Opening Ceremony for the 2012 London Olympics, discussing what was included in this work of spectacular history (the Industrial Revolution) and what wasn’t (chattel slavery and empire). We read Laurie Penny’s 2020 essay, “Tea, Biscuits & Empire: The Long Con of Britishness,” on the gap between Britain’s “literary self-mythologizing” and its historical legacies.

Throughout our discussions, we attended to how Victorian texts participate in the construction of whiteness and how that construction depends on the racialized exploitation of others. The emigration to the Canadian woods at the end of Elizabeth Gaskell’s Mary Barton invited questions about the First Nations on whose erasure this “happy ending” depends. Elizabeth Barrett Browning’s abolitionist poem, with its ventriloquized refrain “I am black!” was contextualized with her family’s slave-trade fortune, demonstrating how the “unseemly” and “‘illegitimate’ sources of English wealth” produce the white feminist subject we have learned to associate with Victorian literature – an object lesson in what Jennifer DeVere Brody calls “the hybrid origins of the English nation” (18).

Another objective, vital to the spirit of the course, was to build a new understanding of “Victorian” that is polyphonic, global, intersectional, and attentive to power differentials. On the syllabus, dominant voices were posed alongside marginalized ones. Dante Gabriel Rossetti’s “Jenny” was read in tandem with a letter from an anonymous sex worker, a favorite text for many students; the middle-class Gaskell was paired with laborer and activist Ada Chew. I also expanded our canon across time, space, and medium. We watched contemporary writer and rapper Akala offer an alternative history of British values on YouTube. A viral Tiktok by a teen girl from Ireland introduced the class to the extent of Britain’s imperial ambitions, and a clip on Twitter traced the marks of the slave trade through the streets of Glasgow. These forays into social media not only engaged students’ attention online but also vividly illustrated the relevance of our course to the twenty-first century.

The course made space for Black and Brown Victorians, and, here, the work of Caroline Bressey was indispensable in “mak[ing] visible the black presence in British history” (1). I assigned Bressey’s academic writing and public history to frame what I considered to be the centerpiece of the syllabus, The Missing Chapter: Black Chronicles, a gorgeous digital exhibit of nineteenth-century photographs of subjects of color, curated by Renée Mussai and others. This work provided students with powerful visual counterevidence to the notion of a homogeneous Britain. We asked questions about the experiences of the often-unnamed subjects; decoded the details of their dress, body language, and facial expressions; and confronted the possibilities and limits of the archive.

Encountering non-white Victorians was a source of surprise and excitement for students. One student of color, for instance, found inspiration in T. N. Mukharji’s playful reversal of the white gaze in A Visit to Europe. We spent three weeks reading and closely annotating Mary Seacole’s memoir, parsing her complex national and racial identifications. We situated these writers in what Mrinalini Sinha calls “an imperial social formation” in which the imperial intersects with “categories of nation, race, class, gender, and sexuality” in “essentially uneven and contradictory” ways (7). This framework helped us understand such instances as Seacole’s assertion of proper British femininity as a weapon against the American racism she encounters in the contact zone of Panama.

Throughout the semester, I modeled an intersectional approach, inviting students to use “intersectional prisms” to see “how power works in diffuse and differentiated ways through the creation and deployment of overlapping identity categories” (Cho et al. 797). As one example, we found ourselves returning to representations of care work, each one shaded by specific identities and power relations. We examined how working-class men tended to “clemming” babies in Mary Barton, discussing how alternative communities of care emerge in response to the decimated nuclear family and absence of social protections. We compared Florence Nightingale and Seacole and how the differently raced gender norms they adopted masked and enabled their professional ambitions. We paid special attention to how Seacole’s maternal persona participates in enduring tropes about Black women as caretakers for white families. We examined visual art that deployed “angel in the house” iconography – paintings of idealized white mothers, dressed softly in white, encircled by children – in contrast to nineteenth-century photographs in which Black and Brown ayahs and domestic workers physically prop up white English children, the putative subjects of the photographs.

In a much-discussed report on the “Victorian Age” volume of The Norton Anthology of English Literature, Nathan K. Hensley writes that “the history that interests [our students] is an active rather than static one, a prehistory of the present … a history of upheaval and contestation and fraught negotiation, of which the dynamic literary forms we love are both cause and symptom.” I have also found students to be enthusiastic about tracing the through-lines between our present moment and our Victorian pasts. In our unit “Black Victorians; Black Lives Matter,” we learned the very Victorian history of Edward Colston’s statue, erected in 1895 and tossed into Bristol’s harbor in 2020. We discussed the aftermath of the statue’s toppling – its controversial replacements, its preservation in the archive – asking, what should we do with our fraught histories? My students’ response was not that we ignore these legacies but rather that we claim and engage them – and I agree.

This cluster of syllabi demonstrates the value of recontextualizing the Victorians by drawing out the forgotten and oftentimes suppressed connections between the past and the present as well as among nineteenth-century cultures and communities. Through concepts and frameworks from Critical Race Theory, Black Studies, Postcolonial Studies, and Indigenous Studies, these syllabi disrupt the geographic and temporal boundaries of Victorian Studies, remaking the field in the process for our students and ourselves.

Priyanka Anne Jacob is Assistant Professor of English at Loyola University Chicago. Her articles have appeared in Victorian Studies and Victorian Literature and Culture. She is currently completing a book on informational clutter, storage, and the novel form. Her article "The Pocket-book and the Pigeon-hole: Lady Audley’s Secret and the Files of Victorian Fiction" received the Honorable Mention for the 2019 Donald Gray Prize.

Sims, G. R., editor. “In the Ayah’s Home (Hackney).” Living London: Its Work and Its Play, Its Humour and Its Pathos, Its Sights and Its Scenes, Cassell & Co, 1904. British Library, General Reference Collection 10349.h.12. Public domain.